The Communal First Saturdays is the first canonically approved public First Saturdays devotion accompanying the Liturgy in a standardized written form that can be established in any parish.

”If you are what you should be, you will set the whole world on fire!” -St. Catherine of Siena
Did you know that Our Lady has already told us how we can be what we should be and what we can do to set the world on fire with the Holy Spirit?

Videos:
See what the Communal First Saturdays is like

The CFSA also helps form chapters in each parish which starts the Communal First Saturdays. The purpose of these CFSA Chapters is to propagate, establish, and maintain the celebration of the Communal First Saturdays devotion in their respective parishes and promote the devotion locally. The CFSA also formed a Central Council to carry out the mission anywhere in the world, especially in the United States.

The President and Co-Founder

One of the founders of the Communal First Saturdays Apostolate, Katrina Leyden, was blessed to go to Fatima in 2008. She knew something about Fatima before she went but definitely learned a lot more after she returned. So, after returning from Fatima, somebody spoke to her about spreading the First Saturdays devotion. She then began to learn about it. She found that Our Lady’s apparition on July 13, 1917 was a particularly important apparition to learn about, especially the 2nd part of the secret. In this apparition, Our Lady told us that to save souls from going to hell, God wants to establish in the world devotion to her Immaculate Heart. Our Lady then spoke of two special requests to do this. Our Lady said if we do what she tells us, many souls will be saved and there will be peace. The 1st request was for the consecration of Russia to her Immaculate Heart, which was fulfilled in 1984 by St. John Paul II and the bishops of the world. According to the official Vatican statement, “Sister Lucia personally confirmed that this solemn and universal act of consecration corresponded to what Our Lady wished (“Sim, està feita, tal como Nossa Senhora a pediu, desde o dia 25 de Março de 1984”: “Yes it has been done just as Our Lady asked, on 25 March 1984”: Letter of 8 November 1989). Hence any further discussion or request is without basis” (Message of Fatima, Vatican.va).

This consecration has had a powerful effect on the world. After the consecration, the end of the persecution of Christians and the return of religious freedom took place in Russia and other countries as well. The Soviet Union collapsed and communism ended in Russia. It is important to note that in a locution to Sr. Lucia, Our Lord had promised that in response to the consecration, the religious persecution in Russia would cease (May 29, 1930). As we can see, Our Lord more than fulfilled his promise.  However, the period of peace Our Lady promised requires the fulfillment of both of Our Lady’s special requests.

The 2nd special request was for the Communion of reparation on the First Saturdays.

Katrina Leyden and other members of our apostolate wanted to help answer that question.

So, the question was raised, what could be done to make it easier for each individual and a larger number of the faithful to make the First Saturdays?

It became clear that the answer was a communal celebration of the First Saturdays. There were a few scattered attempts elsewhere at the time, but they did not include all four practices for the intention of making reparation to the Immaculate Heart of Mary. The Communal First Saturdays does this and much more.

In the process, Katrina Leyden came across this quote from Blessed Paul VI:

“meditation on the mysteries of the Rosary… can be an excellent preparation for the celebration of those same mysteries in the liturgical action and can also become a continuing echo thereof” (Marialis Cultus, n. 48).

It became clear that a program visibly ordered to the Liturgy was needed. We saw the need to have the Rosary before Mass and the meditation after Mass.

We then started the Communal First Saturdays in 2008 at St. Anthony of Padua parish in the Woodlands, TX.

On March 4, 2017, the 100th Consecutive Communal First Saturdays was celebrated since beginning. The timing was so fitting as this took place during the year of the 100th Anniversary of Our Lady’s Appearance at Fatima! 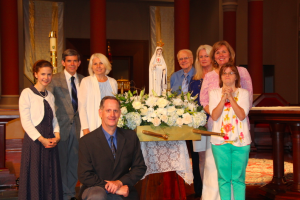